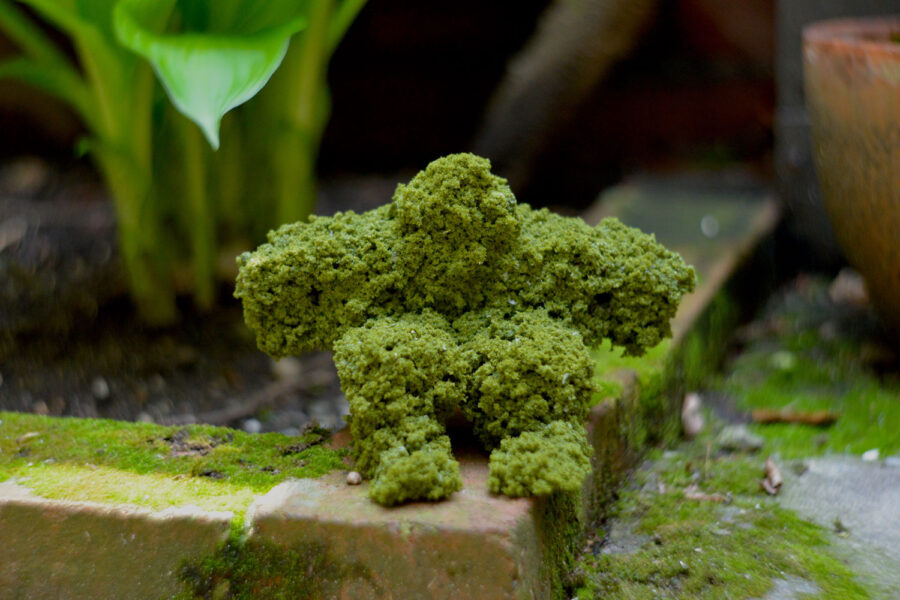 You are cordially not invited to Jake Winberry’s second installation: Tea Time in the Garden.

Having had his original installation canceled due to the Covid-19 shutdown and confined to his home for the remainder of the semester, Winberry has made the conscious decision to return to his former practices.

Having started his career making art objects, Winberry transitioned to immersive installations in the fall of 2019. Casting aside his sculptures and their pedestals, he instead decided to embark on creating interactive spaces that required participation from the audience. “I got tired of just staring at things,” Winberry remarked. “Something about standing in front of a painting or sculpture, deciding if you like it, and moving on to the next one, just felt so impersonal.”

This realization birthed his first exhibition show, The You, Again Zen Garden. The installation consisted of a recreation of a traditional zen garden, complete with sand, rocks, moss, and driftwood. Winberry also created his own set of artisanal tools which hung triumphantly above the garden itself. On the night of open studios, the audience was encouraged to work in the garden, raking the sand and arranging the materials in whatever way they wanted. The show was a smashing success. 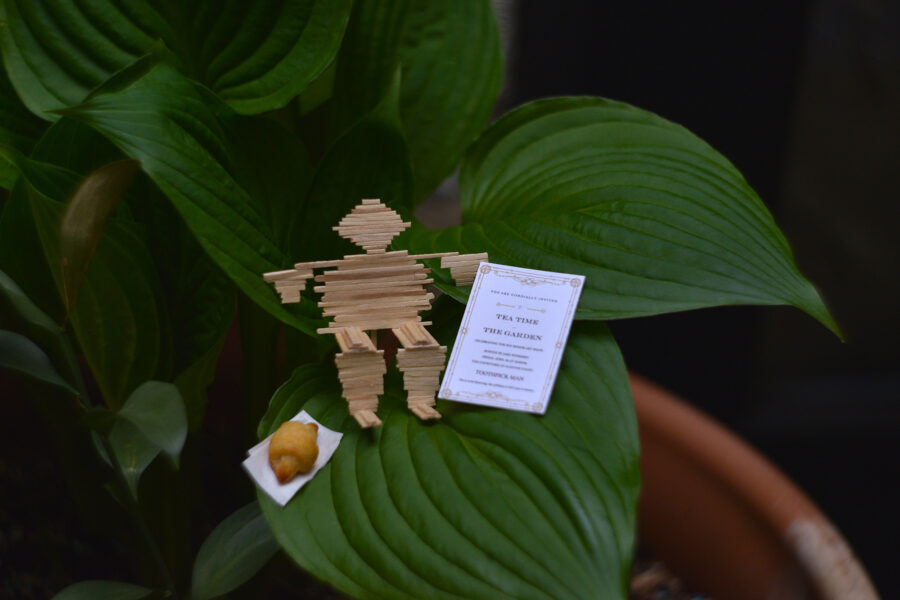 Upon the start of the second semester, Winberry sought to create another interactive space, one that took on a much more personal meaning while still maintaining the same amount of immersion. But when the school shut down, he was forced to table that idea.

Tasked with creating a final project at home with the limited resources at his disposal, Winberry instead decided to return to his original practice of making art objects.

Inspiration came in the form of an older project, a small sculpture of a man in a seated position, made from welded slats of steel. It was a “sculptural doodle” as Winberry calls it, made in the spring of his sophomore year.

For Tea Time in the Garden, Winberry has created a series of identical “seated man” sculptures out of an array of different materials found around his house. Ranging from just a few millimeters on the tip of a pencil to over a foot tall in Lego blocks, Winberry has seemingly created an army of what he calls “seated men.” Other materials used include wire, rope, drinking straws, toothpicks and hot glue, and more.

“It’s my own way of dealing with social distancing,” Winberry commented. “With such a lack of exposure to other people, I decided to create my own group of friends.”

The project culminated in an hour long “tea party” exhibition displayed in the courtyard outside Winberry’s home. The courtyard, which used to have people in it at all hours of the day–drinking, reading, or just chatting–has been eerily empty for the last few weeks because of social distancing. Therefore, Winberry decided to throw a tea party for his own “people,” who due to their genetic makeup, are unable to contract or pass on the virus. Invitations were distributed to each figure, scaled to their size for safe keeping. 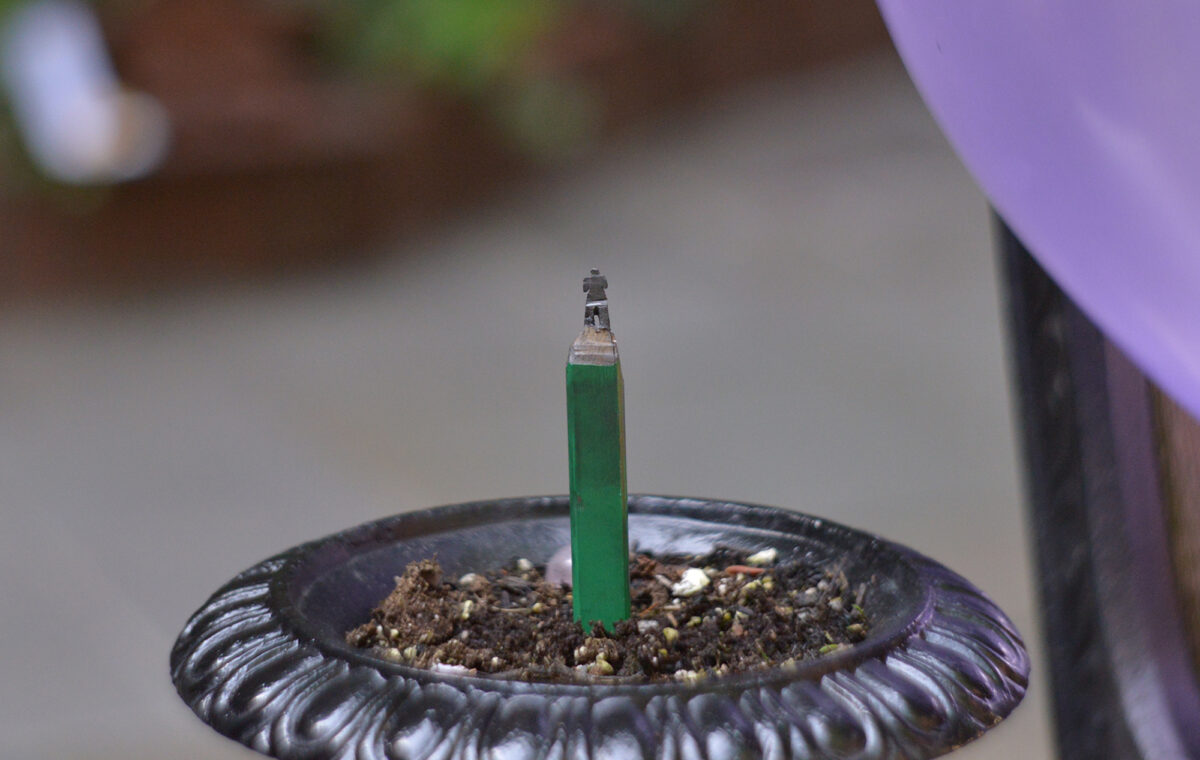 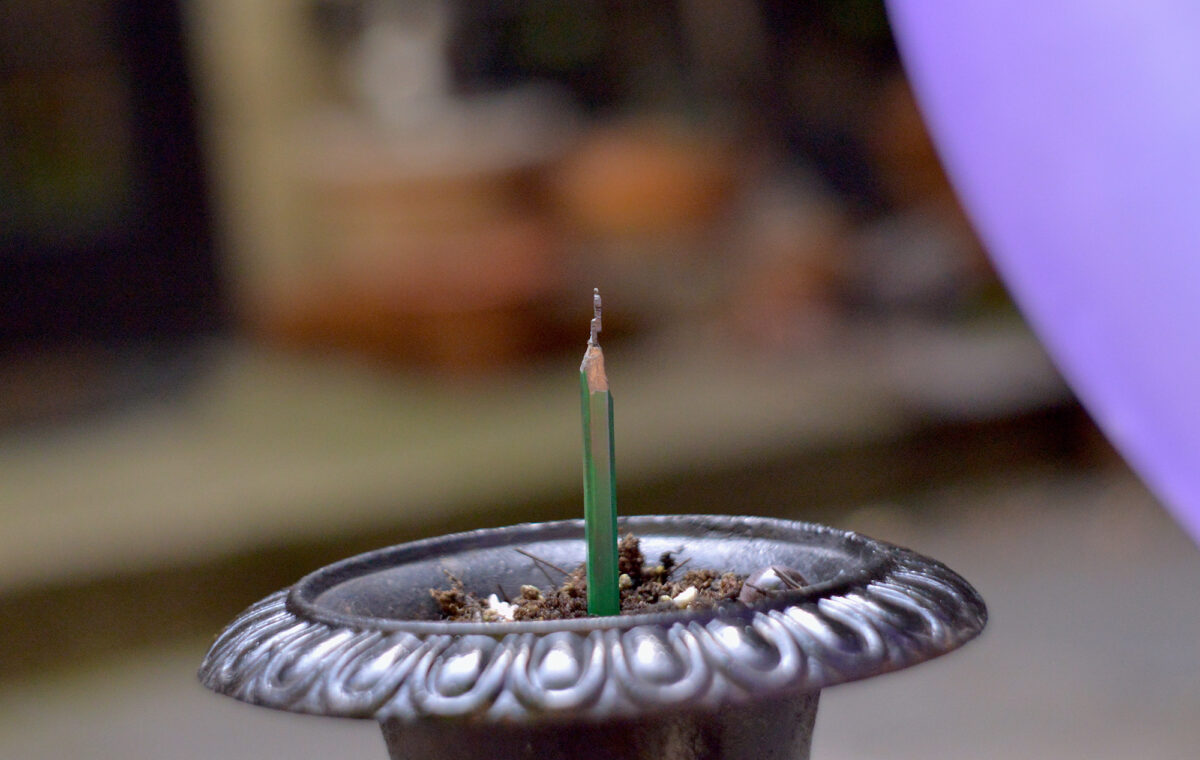 The figures were placed throughout the courtyard, with some situated in groups and others on their own. Each figure was then photographed participating in the party, in the style in which an event photographer might photograph a tea party involving humans. The photographs were then arranged within a digital photo album to commemorate the event. The tea party was not open to any humans other than Winberry, in keeping with CDC guidelines.

The show was incredibly successful according to all who attended. It was equal parts playful and macabre, with the colorful and lighthearted figures alluding to a more dystopic and empty future for public spaces in this new normal. For Tea Time in the Garden, Winberry has successfully transitioned from creating interactive spaces for the audience to participate in, to creating his own audience for himself. 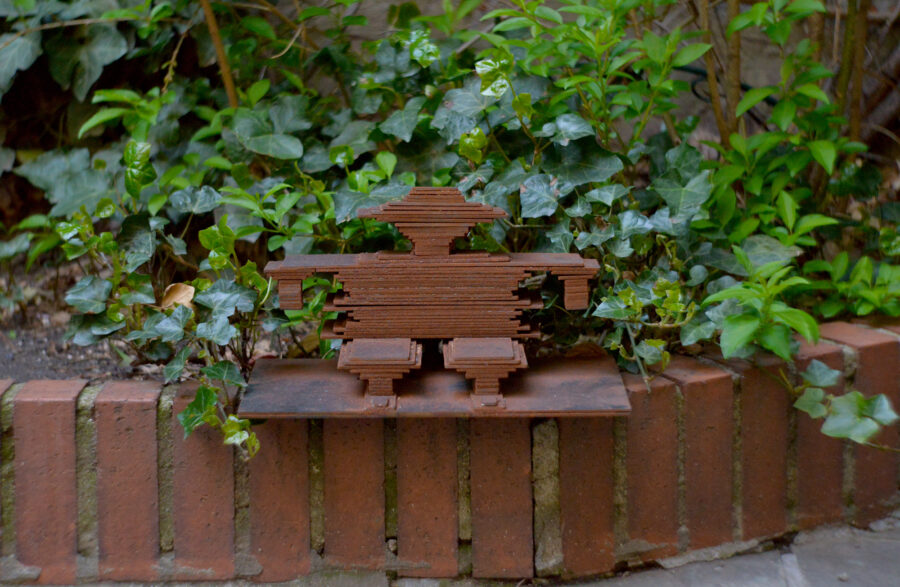 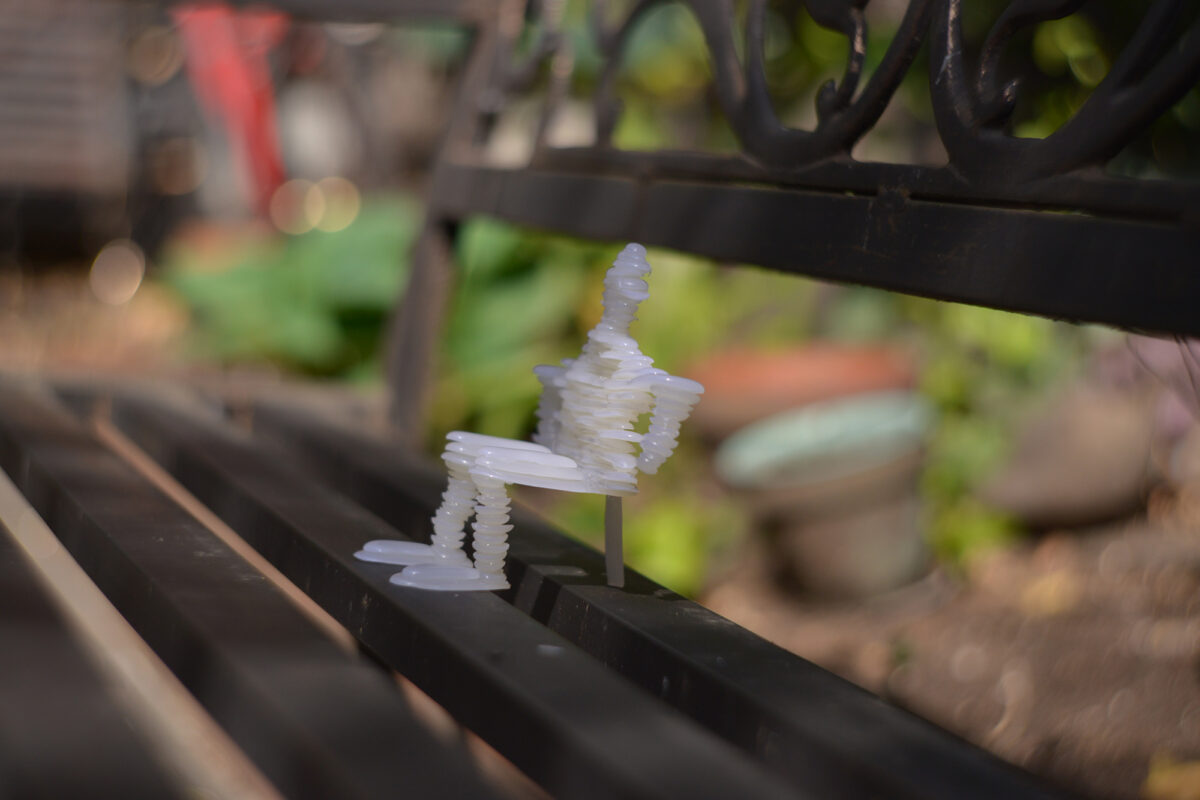 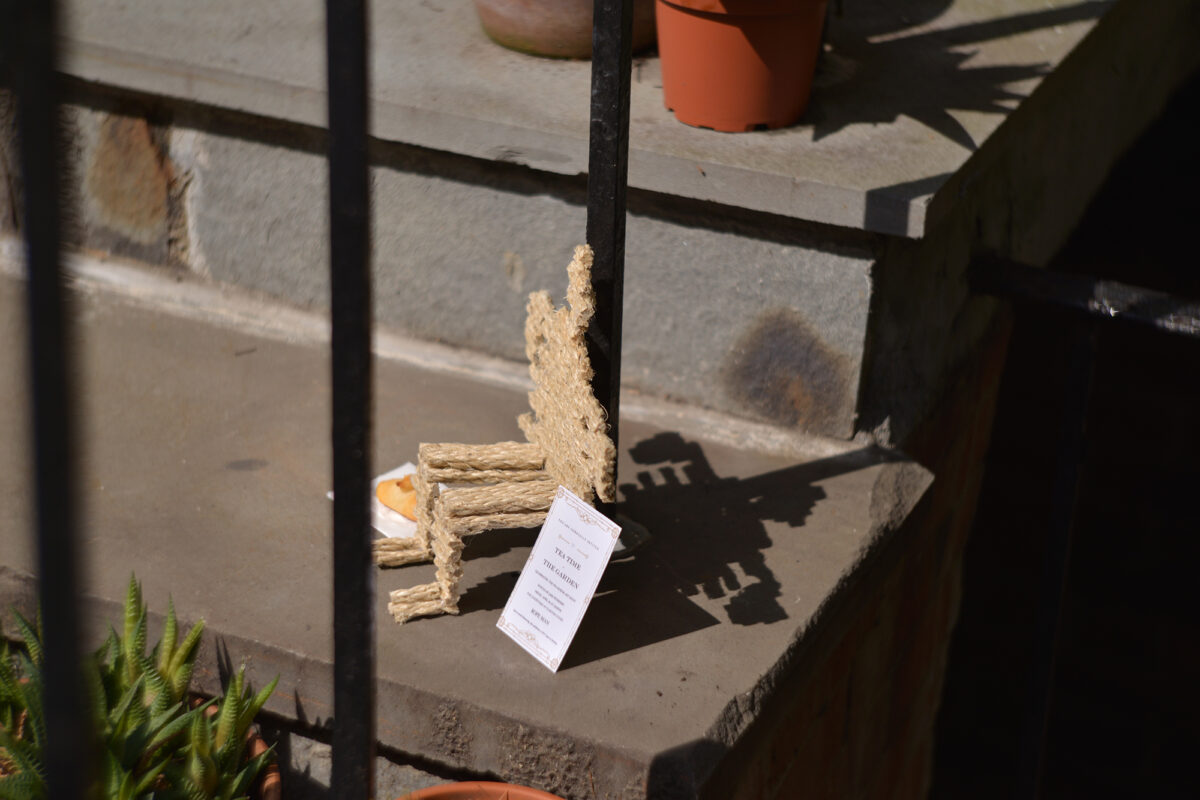 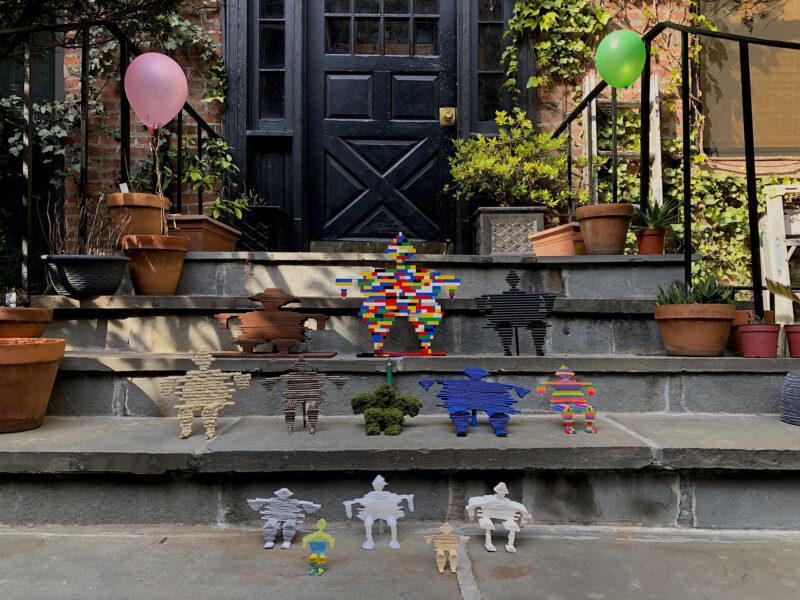 Hao Wu
View all Art
Back to top