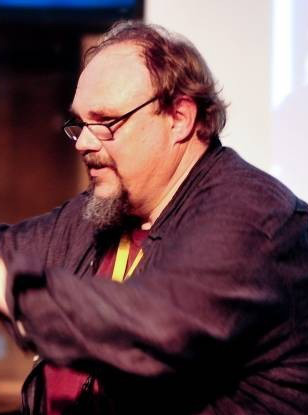 Kersels was born in Los Angeles, California, and holds a BFA and MFA from the University of California, Los Angeles. His body of work ranges from collaborative performances with the group SHRIMPS (1984 – 1993) to large-scale sculptures such as Tumble Room (2001). His interest in machines, entropy, sound and dissolution has produced work that examines the dynamic tension between failure and success, the individual and the group and the thin line between humor and misfortune. Since 1994, his work has been exhibited in such venues as the 1997 and 2010 Whitney Biennials, Centre Georges Pompidou, J. Paul Getty Museum (Los Angeles), MAMCO (Geneva), MOCA (Los Angeles), Kunsthalle Bern and Tinguely Museum (Basel). He has taught at the California Institute of the Arts, and is director of the graduate sculpture department at the Yale School of Art. Kersels lives and works in Connecticut and is represented by the galleries Mitchell-Innes & Nash, in New York, and Galerie Georges-Philippe & Nathalie Vallois, in Paris.

Lizzi Bougatsos
Back to top